If you find the pudb environment too bare bones and old fashioned (I do) and wanted a more modern debug experience, you may want to try using the WindIDE debugger: https://wingware.com/. I am pretty sure the same could be done with PyCharm: https://www.jetbrains.com/pycharm/ but I have only done Wing so far. The below assumes you have installed the WingIDE Personal. I used the deb on an ubuntu box.

I wanted to be able to step through some of the more complex code and see stacks, variables, etc.as well as setting breakpoints. I wanted to be able to do this in bitbake proper aka bitbake/lib/bb/cooker.py for instance, as well as in the metadata e.g. poky/meta/classes/native.bbclass.
--- I managed to be able to do both of the above, but not, unfortunately simultaneously. This may be because I have something misconfigured or for some limitation of the debuggers remote connection ability. This is how I set up the 2 scenarios.

This details how to configure the WingIDE Personal debugger to debug core bitbake (e.g. bitbake/lib/bb/main.py) or a particular tool (e.g. poky/scripts/oe-check-sstate). This is useful if you are trying to understand the program flow or look at some variables w/out adding a bunch of logger.warn(;;;) statements.

Because the metadata is interpreted as part of bitbake parsing/execution, we need to approach this differently. The below steps worked for me. There may be a better way if someone has more knowledge of the Wing Remote Debug interface. Sometimes, I just want to be able to break in a metadata file and see what is happening and what the state is. 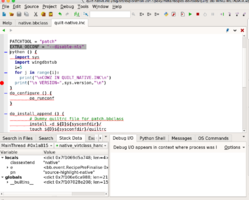