This walk-through has the aim of taking you from a clean system through to including Mono in a build image using the meta-mono layer, then building and packaging an example .NET project for inclusion in that image.

You may already have Yocto installed and just be looking to work with Mono for the first time, in which case you can jump forward to the section you find most relevant,
such as building an example package on the host to test or adding the meta-mono layer to the Yocto build system.

The following assumptions are made. You are:

Obtain the required packages for your host system to support Yocto

First we will install the required host packages for Ubuntu as detailed in the quickstart, i.e.

In addition, if you wish to build the example on the host, outside Yocto, you will need autoconf installed

If you wish to install a newer build of Mono to your host system you can follow the instructions here.

Currently this will also install Mono 3.2.8 but may in future provide newer builds.

If you wish to use the absolute latest Mono then there are instructions you can follow to build a release tarball here and from git here. Be aware this may not be straightforward and that there can be issues, such as with missing files, if you follow this process.

At the time of writing, the current release of Yocto (2.0) can be found here

This will get you the Yocto 2.0 base meta-data and the bitbake tool. You can also add in extra layers, usually of the form "meta-foo" to provide machine support and additional functionality.

Configure the build environment to build an emulator image

This will create a build tree in "build_qemux86" although you could use a different name if you so wish with no adverse effects.

It is entirely possible to have many build trees in parallel in different folders and to switch between them using oe-init-build-env.

After configuring the environment you will be left in the build_qemux86 folder.

You should then build a baseline image, which will take some time (numbers of hours)

Build an example project on the host for testing (optional)

The most straightforward way to compile non-.NET projects for different targets within Yocto is to make use of autotools

Projects which support autotools provide a set of template files which are then used by the autotools to generate Makefiles and associated configuration files which are appropriate to build for the target environment.

Similarly it is possible to compile Mono/.NET projects using autotools

If you take a look at the two source files helloworld.cs and helloworldform.cs you can see the first outputs a 'Hello World' message to the console, and the second creates a Windows Form titled 'Hello World'.

Discussion of autotools template configuration for Mono is outside the scope of this guide, but the mono-helloworld project is based on the mono-skel example which can be found in the Autotools section of the Mono Application Deployment guidelines here

Then run the autotools, configure the build, and make the project

Following a successful compilation you will have a number of new files in the root of the build folder.

This will give you a basic Windows Forms window title 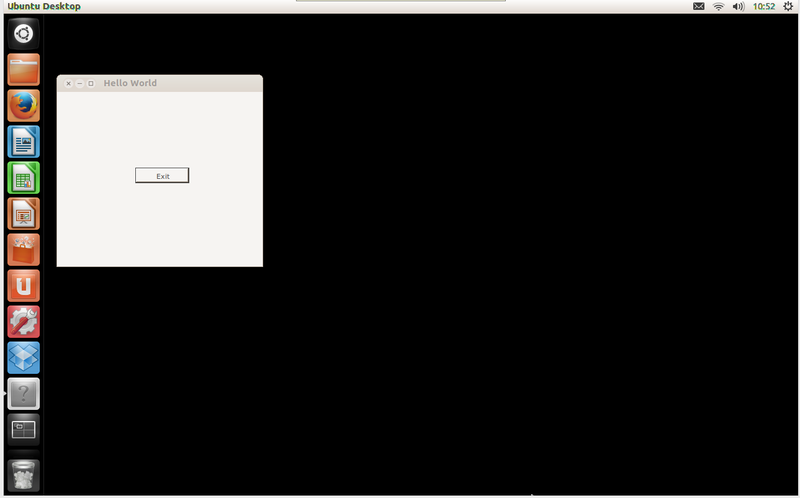 So you have now shown that you can successfully fetch configure and build the project on the host.

Next we will look at how Yocto automates the this process of fetching, configuring and building, then also installs and packages the output files.

Mono provides xbuild which is the Mono implementation of Microsoft's msbuild, discussed here.

In essence this enables a developer to create a solution of projects within their IDE of choice, then use xbuild to build within the Mono environment.

A useful workflow to follow may be to develop locally with an IDE of choice, commit to a git repository upon release, then use a Yocto recipe to build and package that release into an existing image, or for provision to a package feed for update to existing targets in the field.

The mono-helloworld project discussed above also provides a solution and project files to support build with xbuild, or indeed with an IDE such as Visual Studio.

If you have already built the examples using autotools remove the folder and start again.

Check out the mono-helloworld project again

Run xbuild. (As you might guess from the name of the .sln file you could clone this example project to a Windows host and open it up with Visual Studio, and in fact that is how it was created)

This results in a number of new files, including two new Mono/.NET executables in bin/Debug helloworld.exe and helloworldform.exe

This will give you a basic Windows Forms window title

So you have now shown that you can successfully fetch configure and build the project on the host.

Next we will look at how Yocto automates the this process of fetching, configuring and building, then also installs and packages the output files.

Adding the meta-mono layer to the Yocto build system

A preferred method for adding recipes to the build environment, and the method shown with this guide, is to place them within a new layer.

Layers isolate particular sets of build meta-data based on machine, functionality or similar, and help to keep the environment clean.

The meta-mono layer contains Mono specific recipes to support execution of .NET applications on target boards. The layer can be found here.

To use a new layer such as this you first clone the layer from its git repository and then add the layer to your bitbake configuration by editing conf/bblayers.conf

Your bblayers.conf should look similar to this

Now bitbake can see the recipes in the new layer.

You will also see when bitbake runs and shows the Build Configuration that the repository branch and hash of your layer is shown which is useful to know, particularly when comparing notes with others as to why a build fails, e.g.

Build an image including Mono/.NET support

To build this image

This may take a while, even if you have already built core-image-minimal as additional GUI support packages need to be built.

The core-image-mono recipe can be found here and pulls in an include file from here.

You can see in the include file that extra packages are added to the standard core-image-sato image.

This is how you would add Mono support to your image within a recipe, or within a .bbappend file. In fact it should only be necessary to add the mono package as it is not necessary to have the examples unless you wish to for testing purposes.

The mono-helloworld recipe included here shows how to build the example project using autotools. For details see the recipe itself here, and more importantly the include file it pulls in here.

You could choose to replace mono-helloworld with mono-helloworld-xbuild which as the name suggests shows how to build the eaxmple project with xbuild.

Testing the .NET executable on an emulated target

To run up the image, simply use

This will boot the emulator, load up the image, you'll see a kernel loading and then a basic user interface.

If you find that your keymap is incorrect you might wish to set this explicitly, for example

Open up a terminal window using the appropriate icon, Log into the emulator as 'root', no password and run the examples.

Or alternatively the recipe installs a script to wrap use of Mono, so you can use the form 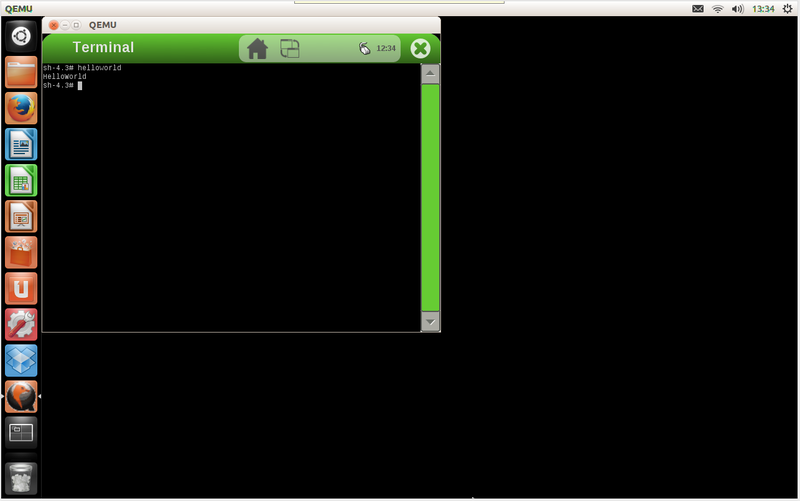 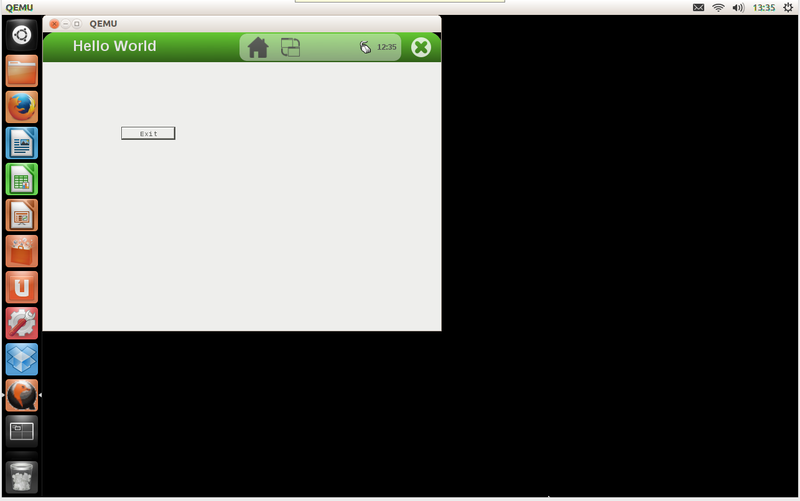 Lastly you can run a test GTK# application with

Breakdown of an autotools recipe

This is the contents of the mono-helloworld_1.1.bb recipe here

Similarly the is the included mono-helloworld.inc file can be found here

For more details on check-sums, licenses and so forth, see Building your own recipes from first principles and the Recipe & Style Patch Guide.

We have a dependency on the mono package, and again we inherit the autotools class to make use of the bitbake autotools functionality.

Lastly we override FILES_${PN} which controls the installed files which are added to the main output package. ${libdir} ${bindir} are standard GNU variable naming conventions for installation paths. For details see here and here.

It might seem quite strange to be installing the executable assemblies to the /usr/lib location, but this is in line with Mono application deployment recommendations here.

We then install wrapper scripts to /usr/bin which can be called directly to run the respective examples. These scripts take the form

Breakdown of an xbuild recipe

The xbuild recipe is similar to the autotools recipe above, excepting that we override a couple of methods to ensure xbuild runs as we wish it too

This recipe can be found here.

First we include the definitions in the include file, and set the version specific checksums for the archive to be retrieved

Now we override the compilation method to call xbuild to build a particular .NET configuration against the a .SLN file in the archive

For more details on check-sums, licenses and so forth, see Building your own recipes from first principles and the Recipe & Style Patch Guide.